I had acute myeloid leukemia back in February of 2011, that's when I was diagnosed. AML affects my white blood cells and can cause me or make me feel very, very sick. I was in the hospital for 6 months and I had 5 rounds of chemotherapy. The chemotherapy made me feel really, really sick. I lost all my hair. I threw up all the time. I lost 30 percent of my body weight and I was only 70 pounds. I couldn't eat or drink, and even just sitting up made me feel really tired and exhausted. I could only do it for a couple minutes a day. I couldn't walk and I couldn't live my life anymore.

Now that I've survived leukemia, I'm back to my old self, playing a bunch of sports. I play water polo, rugby, and my favorite sport of all is riding. I have my horse and I love her to bits. I'm just back to being a normal 17 year old girl again and just living my best life pretty much.

Doctor Berman was one my doctors when I was here, he was one of my favourite doctors actually. He's really funny. He always cared for us really well and he was so nice, I always felt really well looked after when he was my doctor. Yeah, he mentioned his lab and he actually took me down probably around March of when I was in the hospital. He took me down, he let me see the fish, and he introduced me to his lab. It was really, really cool.

I think a little bit went over my head just because of everything that was going on. I actually got to visit the lab again in 2014 or 2015, and they really were able to tell me everything about what they were doing. It was really, really cool. I got to actually like understand a bit of the genetic stuff they were doing. I just think it's wonderful that they're looking into new treatments that hopefully won't be as toxic and dangerous to the patients themselves; and that we can really focus on curing the disease, but not harming the patient in the process.

Even though I am a success story, not everybody is and that's just not acceptable. I don't want anybody to have to go through what I went through. It was awful. Even though I was only in the hospital for 6 months, it still affects me today. If there's any way we can cure that and get rid of it completely, we have to try and do that.

I didn't actually make that many connections just because I was really sick, I was so sick. I had a tumour on my spine so I couldn't walk, it was really, really hard for me to get out of bed. About 6 weeks, I think, were spent in isolation because of an infection I got so I wasn't allowed to leave my room. I did connect a little bit with a kid named Michael Ramsay, and I still talk to him a bit, and Parker, who's the other honoured hero for Light The Night.

That year we found a pamphlet while I was in the hospital for The Light The Night Walk, and we decided we wanted to join the IWK Team. We helped raise money for the first Light The Night Walk in Halifax. We were just shocked by how amazing it actually it was and what an incredible event it was because it was like the perfect length for families. Walking by the hospital particularly, with the balloons and seeing the kids up in the windows with their glow sticks in the room I spent not that much time in, but I was quite familiar with...it was really touching to me.

The first Light The Night Walk I was in, I had to get a wheelchair half way through because I couldn't complete the walk. The last one I did last year, I was able to complete it fine. It was just really amazing to me to see how far I could come and I wanted to make sure everyone else gets those same chances as me.

First year I got out of the hospital, I was actually asked to be the school honoured hero. I went around to different schools sharing my story with them. They're usually junior high, sometimes elementary schools. I think it really touched them to see that somebody their age can get sick, as well. It's not just adults. You always think "Oh, yeah, that happened to them, but it's never going to happen to me." I think to have somebody close in their age and see that I was just swimming 2 weeks before I was diagnosed and all of a sudden I was in the hospital with cancer. That really hit home for them.

This year, I was asked to be one of the honoured heroes for the Light The Night Walk, which as I've said before I've been participating in since it's first one in Halifax. I think it's a really great opportunity for me to be able to help raise awareness for leukemia research and really share story and my beliefs in the Society.

It just blows me away a little bit. You would think that this kind of research would be done in Toronto or somewhere like New York, in those huge cities, but it's right here in Halifax. The fact that we have access to incredible facilities like this is just insane and we need to keep it here as long as we can. I really think everyone needs to support this lab and The Leukemia & Lymphoma Society of Canada because we need to keep it here. It's such a great program and lab that really the city would not be okay without it. 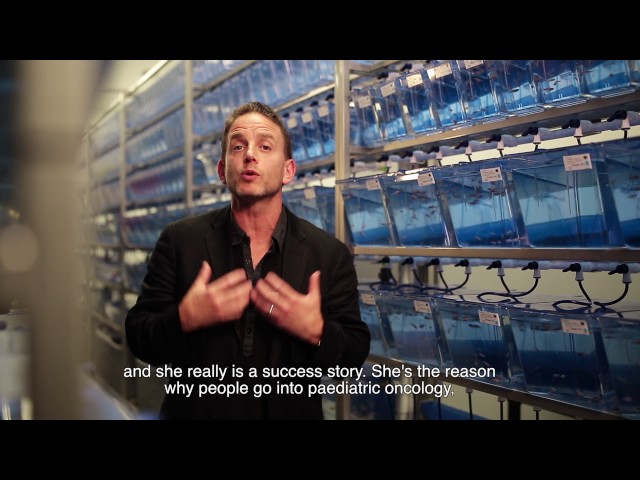